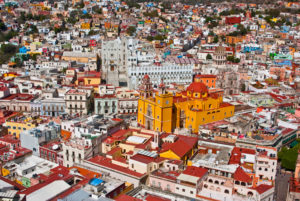 With 5.0% of the Gross Domestic Product (GDP), driven mainly by the automotive industry and surpassing the level of national economic activity that increased by 2.5%, Guanajuato has earned the title of one of the most promising states Mexico.

Just in the last 5 years, Guanajuato received more than 11,700 million dollars in investments and created 79,500 permanent direct jobs through 245 projects – of which 168 are related to the automotive industry. And it’s not only the automotive sector that is growing in the state of Guanajuato, the SDES affirms that it will continue to attract investments related to sectors like “new” technologies, aeronautics, agroindustrial, food, pharmaceutical, and many others.

The government of Guanajuato offers the ideal economic condition for businesses to grow their investments through strong productive chains and the development of industrial complexes that continue to accommodate multiple companies. Making Mexico, once again, one of the favorite destinations of national and foreign investors, according to Luis Ernesto Rojas Ávila the general director of the Coordination of Promotion of Foreign Trade of the State of Guanajuato (COFOCE).

“An example of this is the exports from Guanajuato that from January to September 2017 amounted to 17 thousand 108 million dollars and in 2016 they closed above the 21 thousand 500 million dollars, a record number in the history of the state”, declared Rojas.

The potential of Guanajuato is such that 1,129 companies established in 36 of its municipalities export to more than 125 countries, which generated an increase of 6.03% in exports derived mainly from sectors such as the automotive, agri-food and metal-mechanic sectors in 2017. The human capital of Guanajuato exceeds the expectations of investors, with an economically active population of 2.4 million inhabitants and 47.006 students enrolled, 5, 592 graduates and 4,672 graduates in careers in engineering, manufacturing, and construction.

If you are looking for the ideal destination to move or expand your operations, Guanajuato in Mexico is the ideal place to do it. The Grande Group has experts who will make this process very simple, guiding you or doing everything for you, so that only in 90 days, you are in Mexico, increasing your profits.