Mexico & China Trade On the Rise 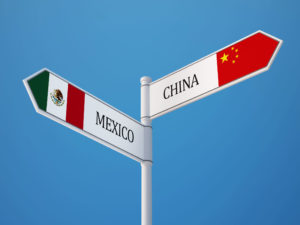 The political, cultural, and business relationships between China and Mexico have recently been gaining strength and the proof can be seen in the recent meetings that have been held by each country’s respective leaders, Xi Jinping and Enrique Peña Nieto.

Qiu Xiaoqi, China’s ambassador, believes that trade between the two nations has placed Mexico as the second largest trading partner in Latin America for China – with an 18 percent growth in the last year alone.

The Ministry of Economy of Mexico notes that trade between Mexico and China has grown to 75 billion dollars, with a deficit balance of 64,114 million dollars. This makes China, Mexico’s second most important commercial partner.

In 2017, an estimated 228.10 million dollars inflows of Foreign Direct Investment (FDI) from China to Mexico were recorded, of which 192.8 million belonged to new investments and 35.2 million between companies, according to data from the Ministry of Economy and the magazine Somos Industria.

“Mexico is a very strong destination for investments, both in terms of geographical position with respect to the United States of America, and in maritime connections, Mexico is a market with growing purchasing potential and affordable workforce with a world-class quality, if the United States continues to leave Mexican territory, it will be an excellent opportunity for other countries that want to invest in the human capital that is there,” said Gilberto Meza, director of the Chinese company Startup Logistics, to Somos Industria magazine

For 10 years the growth of trade in goods has been sustained, particularly in relation to imports from Mexico. But in terms of exports to China, there has been an increase of 45 percent just in the first half of 2017, compared to the same period in 2016.

ProMéxico, a Mexican government company dedicated to strengthening and promoting Mexico’s commercial relations with the rest of the world, said in the magazine Somos Industria that “Mexico finds one of its great strengths in North America, but even so it is necessary that exports to other regions expand permanently. ” 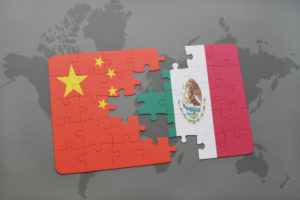 Inversely, Chinese investments continue to increase and diversify the country. According to figures from the Ministry of Economy of Mexico, during 2017, exports from Mexico to China were 45.7% of machinery and electronics, 19.1% of mining, 12.3% of vehicles and 10.2% of optical equipment.

The automotive and auto parts sectors, mining, electronics and renewable energies are the largest investment areas being generated between the two countries. ProMéxico notes that “Chinese companies are increasingly linked to those value chains and sectors in which Mexico is highly competitive, including the automotive, auto parts, electronic, hydrocarbons, renewable energy, and mining, without omitting traditional sectors such as commerce.”

Why the interest in Mexico?

There are three factors that make Mexico a very attractive country to China: the business environment between both countries, the close institutional collaboration, and the growing connectivity. These elements have facilitated the commercial exchange between the two nations.

ProMéxico believes that “Mexico has gone through a relevant process of structural reforms that make it a country with increasing advantages. It is a country that has high ratings in multiple indexes related to business, including competitive costs, high productivity, sophisticated technology, a booming economy, modern infrastructure… and availability of talent.”

According to data from the General Administration of Customs of the People’s Republic of China and the Department of Census and Statistics of the Special Administrative Region of Hong Kong, the volume of bilateral trade in 2016 was 47 billion dollars, which represented an increase in 48.5 percent in relation to the previous year, and close to the 48 billion registered in 2014.

Companies such as Nemak or Katcon, in the auto parts industry, have had great success producing in China with extremely positive results, contributing to the production of the Chinese automotive sector with 25 million units per year, says ProMéxico. 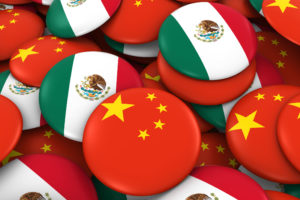 Additionally, Bimbo and Gruma, giants in the Mexican food sector, have established operations in China with very good results. Inteceramic, another food industry giant, has established outlets of points of sale in China.

The Manager of China-Mexico Relations, Javier Arturo Iracheta Villasana, stated in Somos Industrial that, “Today there are around 50 companies in the country, from different sectors, among which are mining, commerce, manufacturing, services professionals, scientists and technicians, real estate services and rental of real estate, hotel services and food preparation, among others “.

Some of the Chinese companies that have just recently invested in Mexico are Mobike and Ofo, the Hofusan industrial park in Salinas Victoria, Nuevo Leon; as well as the China Oil Company National Offshore Oil Corporation (CNOOK) among others.

Mexico is a country where your business will undoubtedly grow. Just like China, invest in Mexico, invest in El Grande Group, and we will make your operations set-up in Mexico a simple process. The only thing you have to do is pack your own suitcases!

Mexico & China Trade On the Rise