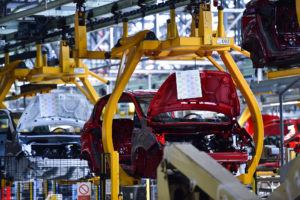 The new Toyota plant that will be producing the Tacoma pick-up truck has brought new challenges to Mexico, amongst them, the need for high-quality suppliers capable of facing the continuing technological transformations within the automotive industry.

The Japanese company will invest $1 Billion USD and generate over 2,000 jobs at their new facility in the municipality of Apaseo el Grande, Guanajuato. This investment will attract a wide range of local suppliers as well as potentially bring in Canadian suppliers who are able to provide higher quality production. Suppliers at the Toyota plant in Ontario, Canada were awarded the Platinum Recognition by Initial Quality Study SM 2014 (IQS), as they were the manufacturers with the least amount of reported problems by unit (12 per day).

The Consul General of Japan in Leon, Mexico, Yasuhisa Suzuki, explained that suppliers in the Bajio region (West-North Central Mexico that includes parts of the states of Aguascalientes, Jalisco, Guanajuato, and Queretaro) lack experience positioning themselves within the value chain, stating, “Many suppliers have not grown that much. The automotive industry has rapidly evolved, it now demands more sensors or electrical parts and aluminum, steel or carbon fiber production materials.”

As an example, just 30% of the Japanese OEM’s suppliers in Mexico are local, while in Thailand between 60% and 70% of the companies that supply Toyota are local. However, the overall outlook in Mexico is encouraging as companies such as Nissan have placed their stakes in Mexico. They now receive 85% of their needs from Local Suppliers, which has greatly improved manufacturing processes and enhanced product quality.

This was affirmed by Takeshi Uchiyamada, the Administration Counsel President for Toyota Motor Corporation (TMC), who said, “Mexico is and will continue to be a crucial manufacturing market in the Americas for Toyota, in all of its operations”.

“Toyota Motor Manufacturing of Guanajuato will play an important role in the way we produce our vehicles in the future and establish a new standard of excellence in the manufacturing Industry (…) This plant will be a key factor on how we make our products in the future because conducting the same business processes every day is not enough, thanks to Toyota’s new global architecture and efforts in this region, we will give our clients a product, emphasizing its continual improvement”, Uchiyamada assured.
This continual improvement is an attribute that Canadian corporations can help provide. Currently, in Guanajuato, there are 8 Canadian based manufacturing companies who have invested over $200 Million USD.

Canada’s Ambassador in Mexico, Pierre Alarie, declared, “The relationship between Mexico-Guanajuato and Canada strengthens every day”, and also considers, “the largest automotive and aerospace industry company concentration is in the Bajio region, with Guanajuato having the most, making this locality a strategic point for Canadian companies that seek to establish in Mexico.”

Still, the main automotive supplier for the US is Mexico, wherein the last 4 years investments have reached above 120 billion USD with 10 new plants developed in this sector. This has led many to wonder if Mexico has enough internal capacity to satisfy the growing demand.

Regarding this point, Oscar Albin, the President of the National Industry of Auto Parts, affirmed that, “Mexico has enough internal capacity to supply established OEM’s in our territory, though there are only an estimated 400 Tier 2’s and 400 Tier 3’s in the country, way below the 1,200 companies that should exist in each Tier to satisfy the future and present demand”. This shortfall creates a huge window of opportunity for foreign investors to come into Mexico and produce the supplies necessary to bridge the gap in the supply chain.

THE SUSTAINED GROWTH IN THE MEXICAN AUTOMOTIVE SECTOR

“The automotive industry in Mexico plays a leading role in the country’s economic scenario, generating over 3% of National GDP and 18% of manufacturing GDP, achieving foreign exchange above $52 billion USD per year and generating approximately 900,000 direct jobs in the country”, detailed the Executive President of the Mexican Automotive Industry Association, Eduardo Solis. Mexico is the 4th highest light vehicle exporter in the world.
Foreign Direct Investment has favored the installation of new plants in the country. There were only 10 light-vehicle manufacturing plants in 1993 and 5 plants manufacturing motors, but now there are 18 plants, representing 8 different brands from countries that include the USA, Japan, Germany, Netherlands, and Spain, according to the Center for Public Financial Studies.

When it comes to production costs, Mexico offers 12.3% in cost savings in the manufacturing of auto parts versus the USA, as well as 16.3% in metallic components, 9.8% in precision components and 15.2% in plastic inputs required by the industry, according to ProMexico’s information.
Labor costs are one of Mexico’s main competitive advantages as the country has one of the lowest labor costs in this sector, worldwide. The salary in the manufacturing industry per hour in 2015 was $2.42 USD, more than 10 times lower than the salary in the US.

Due to Mexico’s cost competitiveness,j the difference in vehicle production costs between Mexico and the US is nearly $674 USD per unit, according to the study elaborated by the Center for Automotive Investigation.
Additionally, another competitive advantage of Mexico is the local raw material costs used in production within the industry. Although not every material produced in Mexico is of a grade adequate for the automotive industry, it is still cheaper to import into Mexico than into the USA.

“During the last five years, the sector has reached record-breaking figures both in Production (82 Billion USD annually) and in Exportation ($65 billion USD annually). Currently, Mexico is the sixth largest producer in the world and the expectation for the coming years is for it to reach a higher position (…), possibly the 4th by 2020 in auto part production worldwide, with a value above $100 billion USD”, stated Oscar Albin, President of the National Automotive Industry Association.

Regarding the sales of manufactured vehicles sold within Mexico, historic levels were reached in 2016 with 1,603,672 units sold. Through July of this 2017, 45% of the units produced in Mexico were sold in-country.

Additionally, the country has been preparing for the industry´s growth through workforce training programs. Recently, Mexican universities have oriented student formation towards the automotive sector in the area of research and development, allowing graduates to achieve skill levels similar to those in the US and Canada, according to data provided by the Center for Public Finance Studies.

In spite of an unstoppable upward development of the automotive industry, the arrival of OEM´s like Toyota has brought to light the sector’s continued challenge of fulfilling the needs in infrastructure, logistics, and supply chain.

According to HSBC Global Connections data, the most in-demand processes within the industry are metal stamping, foundry works, machining, milling, die-casting, plastic injection molding, mold design, and tooling. Mexico is currently working to perfect these processes, but still, 74% are imported.
Managing to supply the sector’s demands is one of the main challenges due to the lack of Tier 2’s and Tier 3’s. 400 Tier 2’s and 400 Tier 3’s have not been able to fulfill the sector’s requirements. For this reason, countries such as Canada, have an important growth opportunity in Mexico.

Mr. Trevor St. Louis, who has established more than one successful company in Mexico (last project was Kodiak Molding Solutions), affirmed that “Mexico offers business opportunities because of the growth the automotive and aerospace industry has had. If you are in the USA or Canada you can easily travel to Mexico and do business. In addition, you will find a great workforce, HR, financial experts, Quality Management, Engineers…[and] the best thing about Mexico is that you can do business at a great price.”

Another challenge within the industry is specialization needed by some of the industry’s manufacturing processes, as well as the specific training needed for the labor force to face these increasingly complex situations while allowing innovative, development, and design solutions. The Canadian investor highlighted that, “Though Mexican labor force does not offer the same technical skills as in the USA and Canada, they are people willing and capable of learning, and in addition, you can produce in Mexico with a similar quality that you would produce in Canada, but at a lower price – that is the main attraction of Mexico”, Mr. St. Louis affirmed.
Definitely, the arrival of new OEM’s, like Toyota, represent a challenge for companies to manufacture products of better quality, precision, and of higher specialization. While Mexican suppliers are now manufacturing at the levels of standards needed by the Japanese market, the opportunities are endless for Canadian manufacturers to expand into Mexico and gain valuable market share.