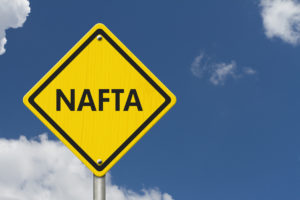 Renegotiations for NAFTA have been in full swing since August of 2017, with significant economic implications for all the nations involved. The historic and landmark trade agreement, which went into effect at the beginning of 1994, has been essential in facilitating commerce between the United States, Canada, and Mexico.

For those who keep an eye on the pulse of manufacturing in Mexico and the factors that directly impact it, the developments of these negotiations are more than worth following. At El Grande, we have helped numerous manufacturing businesses expand into Mexico and benefit from the manufacturing-friendly economic climate, through our strategic international business services. We stay informed about all things related to NAFTA and manufacturing in Mexico so that we can help you make the best decisions for your company.

In June 2017, reports were released detailing how business had never been better for automobile manufacturers who were operating manufacturing facilities in Mexico.

Mexico smashed existing records for the manufacturing and export of vehicles in the first quarter of last year. Combined, the automotive companies in the country made 1,884,335 cars between the months of January and June of 2017. This explosion in production represented a 12.6% rise over the output during the same months of 2016. Automobile manufacturers across the globe look to Mexico as a prime example of benefits in productivity that have arisen from the cooperation of NAFTA nations.

The new marks were diligently compiled by the Mexican Association of the Automotive Industry (AMIA), which has been tracking statistics pertaining to automobile manufacturing in Mexico since 1988.

It was not only production numbers that saw a great leap in the first six months of 2017, either. According to AMIA, exports from January to June reached a total of 1,513,334 units, which was an increase of 14% over the same time period of the year prior.

The boom in business for Mexican auto manufacturers was a direct result of a then-current trend: NAFTA was benefiting the auto industry more so than any other.

To that point, the AMIA reported at the time that of all exported Mexican-made vehicles, 76% found their way into the US and 9% ended up in Canada. The 85% of exported vehicles being sent to NAFTA trade partners is definitely something of importance in discussions.

AMIA also issued a related statement that Mexican vehicles represented almost 15% of all light vehicles sold in the USA last June, and that totals included vehicles from companies like Nissan, Volkswagen, GM, and Ford.

Leaders in both Canada and Mexico have both urged the United States to continue participating in NAFTA. This includes the heads of many Texas industries who would like to see the majority of the laws set by NAFTA remain largely in place with only small changes.

Individuals such as Todd Staples, the president of the Texas Oil and Gas Association, noted that NAFTA has been “fundamental” to keeping fuel prices fair, and he called for preserving certain elements of the pact to ensure the state economy remains strong. Even Texas Governor Greg Abbott has gone on record saying, “NAFTA is very important and very good for U.S. workers and for Texas.” Adding, “It’s very profitable to our bottom line. We want NAFTA to continue.”

The 7th round of talks are set to take place from February 25th to March 5th in Mexico City. One of the most important topics will be revolve around the rules for automotive content and rules of origin.The issue is set to receive more than 20 hours of discussion.

Negotiators from the U.S., Canada and Mexico plan to begin on rules of origin, which govern how much geographic content a product must have to benefit from Nafta tariff exemptions, on Feb. 25, according to a draft agenda obtained by Bloomberg News. The issue is set to receive more than 20 hours of discussion, among the most of any topic, according to the schedule, which isn’t released publicly because talks are held behind closed doors.

While NAFTA is a huge part of the future of automakers in Mexico, operating production facilities has many additional issues and obstacles that need to be navigated.

El Grande understands the ever-changing landscape of manufacturing in Mexico and our years of experience keep us and our clients attuned to the industry’s pulse. If you are looking to move your manufacturing business, call us today so we can help lay the foundation for a successful future in Mexico.