Mexico Will Produce As Many Automobiles as Canada by 2020

The Bajio region that encompasses the states of Guanajuato, Queretaro, Jalisco, Michoacán, San Luis Potosi and Aguascalientes has experienced an unprecedented economic growth in the last 10 years. This region has been crowned as one of the main business sectors in Mexico and is considered, with the arrival of automotive and aerospace foreign investments, the fastest growing region in Latin America, according to the Ministry of Economy in Mexico.

Not only that, the steady pace and consistency with established governmental policies have generated an attractive environment for foreign investors positioning The Bajio region as the next manufacturing center in North America.

Such is the case per ProMexico, a Federal Government branch dedicated to attracting foreign investments to Mexico and helping companies to export and internalize their operations through counselling centers in 40 countries, that has managed to attract investments such as, Mazda, Toyota, Pirelli, and Michelin, amongst other companies. As Fabian Gamba Labastida, the Guanajuato State Director of ProMexico, stated that just this past year, ProMexico attracted 730 million USD into the state.

Additionally, Jorge Oliveros Jair Nara, Director of Sustainable Economic Development in Apaseo el Grande, Guanajuato, the locality where Toyota’s new plant has been inaugurated, considers that “Today Guanajuato has become the most important economic growth platform for doing business in Mexico and is going through an impressive financial moment by having a world-class economic infrastructure.”

Cities in the northern part of Mexico have led the industrial sector but are now being displaced by the cities in the states of Guanajuato, Queretaro, Aguascalientes and San Luis Potosi, the first 2 states are considered major destinations according to KPMG’s most recent client survey (Senior Management Perspective in Mexico 2016).

This last report revealed that at least 27% of companies see Queretaro as a main destination for expanding their business, while 24% considered Guanajuato for the same purpose.

The figures speak for themselves, as the Bajio region registered an increase of 80.5% of Foreign Direct Investment (FDI) only in the 1st trimester of 2017, according to the Ministry of Economy; Guanajuato captured most of the FDI in the region with $424.9 million USD, Queretaro reported $379.8 million USD (an increase of 75.4%), Aguascalientes registered $341.8 million USD, and finally, San Luis Potosi managed to receive $293.47 million USD.

The state ranking, according to Doing Business 2016 presented by the World Bank, noted that Aguascalientes and Guanajuato were considered as the best places for opening a business, which is an opportunity that OEM’s have learned to value.

“Major OEM’s have had a long-term vision in generating an interesting export platform towards the US, where the automotive plants have developed certain models in Mexico and maintain their car production at their point of origin”, affirmed by Leticia Armenta Frayre, Director of Economic Analysis Center from the Tecnologico de Monterrey University.

In this regard, German Baldwin, Sales & Business Manager of Martinrea, a Canadian-based company, assured that “Mexico is the place to be, the actual conditions in Mexico are unparalleled, very few regions in the world can achieve growth like in Mexico, and this is an important competitive advantage at the moment of making a decision. The country has also consolidated as one of the main locations for vehicle production. We sell to companies that produce cars so we have to be in Mexico”.

“Guanajuato is particularly offering incredible benefits at this moment because it’s in the heart of where everything is happening, we are within an hour from both Aguascalientes and San Luis Potosi”, Baldwin explained, a reason for why Martinrea will open its 11th plant in Mexico in the state of Guanajuato.

From the experience of the second largest worldwide automotive supplier, the Mexican workforce is committed and eager for labor opportunities, “they are people that want to grow, they are searching for the best opportunities for their families, and they are kind people that have given us impressive results at Martinrea”, Baldwin exposed.

Mexico has positioned itself as one of the main manufacturing centers of the world, “where 20 years ago our only incentive was a low-priced workforce, we have improved to a point of having a qualified workforce, investing in technologic advancements that will place us as a country that adds more value beyond manufacturing”, Baldwin declared, who in addition considers that “the growth opportunities within the Mexican market are enormous and represent a great opportunity for whoever decides to do business, not only for producing but also selling. The Mexican economy is thriving, an incentive for producing, meaning that if someone decides to sell in Mexico, they will probably be successful.

Just in the month of June, the light vehicle production reached 334,606 units; where 276, 626 units were exported, representing a 12% increase year over year. It’s important to emphasize that the national internal light vehicle sales in the first semester of 2017 reached historic levels. 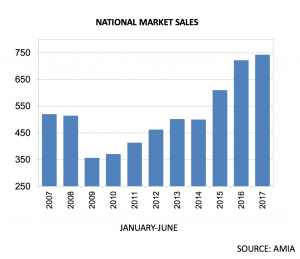 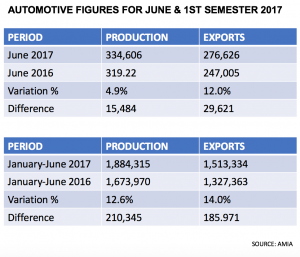 The charts above put Mexico in 7th place within the top 10 worldwide major automotive producers, and 1st in Latin America, according to the Mexican Automotive Industry Association (AMIA for its Spanish acronym), an organism whose goal is to produce 5 million vehicles by 2020. A sign of this boom: between 2013 and 2016 the automotive manufacturing sector jumped by 205%. 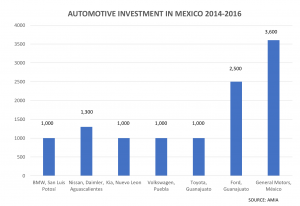 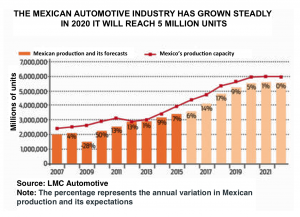 These rewarding foreign investments have fulfilled their fundamental purpose in the last 20 years thanks to NAFTA, which provided fertile grounds for the buildup of multinational companies in Mexican territory who invested mainly in the automotive and aerospace manufacturing industry.

Toyota will invest $1 billion USD in a new plant in the state of Guanajuato, while Honda will allocate $800 million USD for their second plant in Mexican territory; GM, Nissan and Renault, Mazda, Ford, Honda, Toyota, Bombardier, Michelin, among others, have established their plants in The Bajio region.

“Mexico’s industry has tremendous potential, over $20 billion USD in investments have been announced and inaugurated, from the beginning of Enrique Peña Nieto’s administration, from which $17 billion were for the automotive assembly industry and the rest were auto part suppliers”, said Mexico’s Economic Secretary, Ildefonso Guajardo.

Per Vladimiro de la Mora Honc, the president of the Mexican Federation of Aerospace Industry, expectations for the aeronautic industry are just as promising for 2020, where Mexico will position itself as the 10th largest country producing in the aeronautic sector. 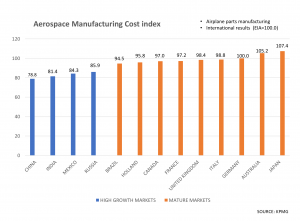 One of the reasons why foreign companies have decided to invest in The Bajio region is due to its excellent location, which facilitates effective northern and southern export of goods. From the Bajio the access to the main exits are easily reached by railway, the highways, and the sea ports which allows its products efficient transportation to any part of the world. Additionally, the country has stable public policies that protect the investor and promote transparency. The qualified workforce is another fundamental factor that has strengthened The Bajio’s attractiveness for investments. There are over 5,000 engineering graduates per year in Guanajuato, helping to place Mexico within the Top ten countries for numbers of engineering graduates. This has been affirmed by Lintel, a construction-related company whose main customers are Japanese corporations.

These conditions have lead, according to the General Director of Jetro-Mexico, Tadashi Minemura, to increased Japanese investments into the country, especially in the automotive sector and Tier 2 supplier base. EL Bajio has over a thousand Japanese companies, mainly in Guanajuato, Celaya, Irapuato, Salamanca, Aguascalientes and some parts of San Luis Potosi. 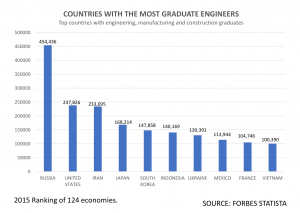 Another growth factor for Japanese investments has been that “Mexico is a country with a low-operating cost in regards to automotive manufacturing. In Japan, an employee would cost around $110 USD per employee in terms of manufacturing a car, while in Mexico the cost is $88 USD”, Mario Fernandez Davalos assured, Leading Member of Japanese Practices for KPMG in Mexico.

Japanese companies are not the only ones to see the growing market of opportunities in the Bajio region, French investors continue ramping up their commercial relationships with our country despite the commercial uncertainty that Donald Trump’s arrival has generated, the president of the French Foreign Trade Counsel in Mexico, Dominique Azam affirmed. He added, “After 2 months of uncertainty regarding what is transpiring between the US and Mexico, the French companies are now optimistic, and will confirm investments in the short, medium and long-run. We must not forget that many of these companies are devoted to the internal market.”

The General Director of ProMexico, Paulo Carreño King, declared that over 30 French corporations in the automotive, agricultural and energy sectors have shown interest in expanding their business to Mexico and are currently in negotiations.

Canada is going through the same situation, as it has decided to strengthen its investments in the country, per Françoise Ouellet, VP of the Canadian Chamber of Commerce in The Bajio region (CanCham). He also emphasized the increase in the exchange rate parity between the US and Mexico, and the attractive cost of the workforce in the industrial sector.

For every 10 cars manufactured in Mexico, 4 are manufactured in the Bajio region. In three of the Bajio states, Aguascalientes, Guanajuato and San Luis Potosí, they together produce about 1.5 million cars per year, a figure lke that of the United Kingdom and higher than that of Russia and Turkey. Additionally, it is estimated that by 2020 the production in the Bajio, as a whole, will be 2,150,00 units, a figure similar to Canada’s production, and above the production of France.

Mexico has surged as a main destination for foreign investment, and The Bajio region is its industrial diamond.

Mexico Will Produce As Many Automobiles as Canada by 2020